Ever since I’ve tried 5K+ and 8K at Pimax backer meetup in Berlin, i was waiting for my own. Originally promised in September, the unit arrived in early December. So, what is it like to actually own one? 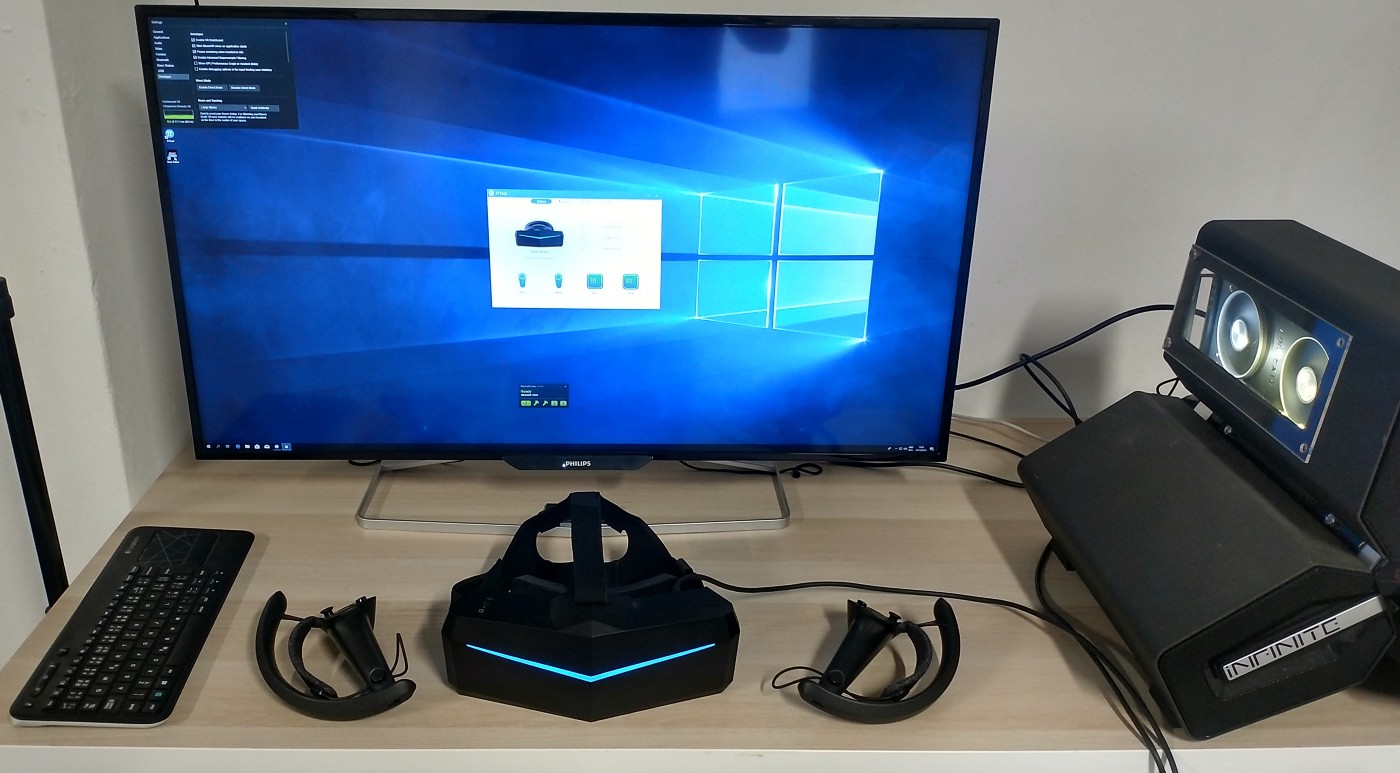 Mind-blowing. Pimax brings VR visuals to next level and with it raises immersion — thanks to wider FOV you feel more inside and surrounded by the scene. The image is very crisp, allowing to see previously unseen details in many experiences (or exposing there are none). Especially in titles that rely on visual appearance, like theBlu, it’s worth experiencing them again in Pimax. 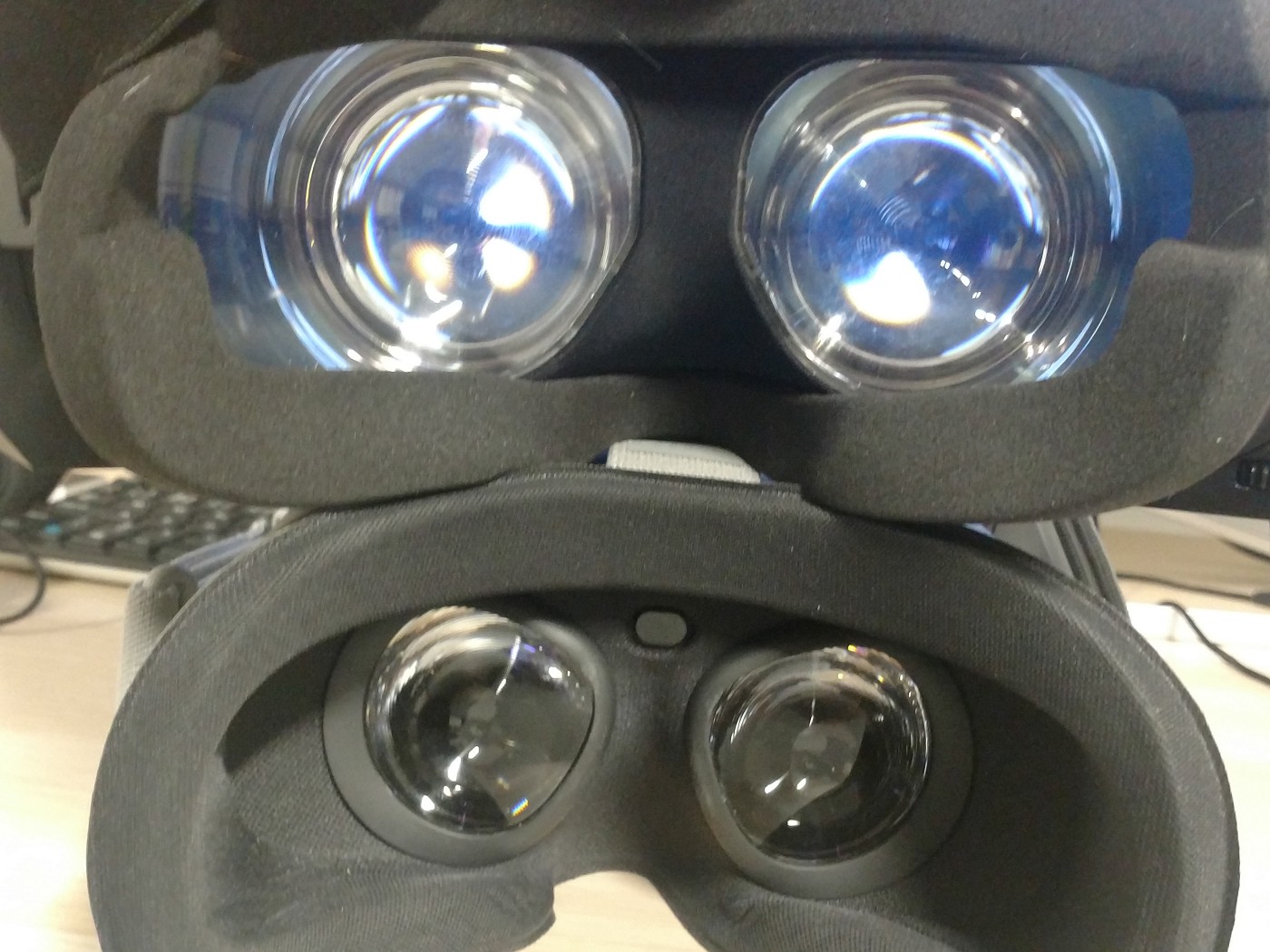 Technically there are 2 panels with 2560x1440 resolution each, having a full RGB matrix (therefore 50% more subpixels than traditional headsets using PenTile matrix). The panels are custom LCDs. I have no problem with the colors, response time or black levels.

There is noticeable distortion at the periphery, which Pimax software allows to compensate this by restricting Field Of View, there 3 settings available:

A lot of people tried Pimax 5K+ at our iNFINITE.XR.Lab (which is open for everyone) and we found out everyone prefers different settings. I prefer medium, where to distortion is still visible, but not bothering me. Some people go with ‘there is still distortion at medium, so let’s not sacrifice FOV and go Large). Others (usually those prone to motion sickness) prefer Small to have no distortion at all.

While the visuals are clearly superb and above anything else, in other areas Pimax leaves much to be desired. For instance there is no integrated audio — which is almost a must have in modern XR device, be it headphones like Oculus Rift or Vive Pro, or speakers like Oculus Go and Quest, Hololens or Magic Leap. Also the head strap is comparable to old Vive before Deluxe Audio Strap, while it’s not uncomfortable, the industry has moved beyond this point. Build quality is closer to a prototype than retail product.

Another thing is reliability, when the headset sometimes refuses to boot or the image is broken, requiring rebooting the headset and/or the computer to fix it. Tracking is SteamVR Tracking 2.0, however sometimes there are tracking errors (in same environment, where Vive Pro works flawlessly).

Also, Pimax is missing proximity sensor, so the headset doesn’t turn off when you take it off, forcing GPU to render frames even when it’s sitting at desk — even when no game is running and the screen fallsback to SteamVR home. Out RTX2080Ti can get very hot if someone leaves it running.

Pimax uses PiTool as a driver interface for it’s headset. PiTool then interfaces with SteamVR and Oculus software to provide compatibility. Maybe this implementation is the biggest downside.

While Pimax uses SteamVR tracking and Vive controllers, everything is handled by PiTool. This essentially cuts the HMD from the rest of SteamVR ecosystem. As you might have noticed, we are using Valve Knuckles as controllers. However, Pimax doesn’t support them, so they act as regular Vive controller. We can still benefit from the ergonomic improvements, but access to trackpad, buttons, capsense or pressure sensor is not possible. Also playing Knuckles content is not possible. Same is true for Vive trackers, gloves etc. Someone from Pimax told me they don’t have Knuckles to test or integrate. If someone from Pimax or Valve is reading thing, can you please work together a bit? It would be awesome if you did :) When it comes to game compatibility, most titles generally works, however there are some that are broken, with image not being aligned properly or some other problems — for instance, the blinders in Eagle Flight are completely messy.

PiTool is supposed to bring Oculus compatibility as well, however i failed to get that running.

RTX2080Ti was enough to drive smmotheverything we tried. As stated above, as Pimax forces rendering even when it’s off head, the GPU can get very hot and start thermal throttling — which is where performance becomes a problem and the GPU starts dropping frames. Right now have a rule that when Pimax is not in use, everything needs to be turned off.

Is Pimax worth it? 100%. Humans are visually dominant creatures and visuals are something Pimax excels at. While somethings can be fixed in software (like Knuckles compatibility), something might be fixed by addons (like new head strap with integrated audio), there are things that can be fixed only with next revision (missing proximity sensor). Still, the product is worth it and definitively the most used headset in our lab, however unfinished it is.
Back to Top
Close Zoom