Before we begin, let’s stress out one thing — most people don’t get sick while using VR. Only a minority does, it’s very individual and often depends on the hardware and software used. There are many factors that can cause VR sickness and probably not all of those are known. Currently the main theory behind understanding what causes VR sickness is sensory conflict.

The feeling of sickness we experience is our body’s defense mechanism against poisoning. When we eat or drink something bad, human body cannot analyze the content. But it can detect conflicts between different sensors, and assumes that it has been poisoned. The nasty, nauseating feeling is a signal, telling us that we’ve consumed something dangerous, and that we should probably throw up, to rid our system of the toxins. But we encounter this commonly due to food (or in case of the party people — alcohol) poisoning, not because of new technologies.

So how does it translate into sick feeling some people get during VR experiences? While in VR, we’re replacing real world sensory inputs with the artificial ones. If the simulation is not good enough to truly fool the senses, the body will not recognize the VR simulation to be the cause, but will instead think that it was introduced to common poison.

That is why for instance, improperly calibrated optics (that cause user to see distortions while moving their head) would cause the sick feeling. Another factor is latency between the head movement and image inside the headset. Higher delay translates into higher chance of people feeling sick. Threshold for safe latency is about 20ms. And while during normal PC gaming, the latency between mouse and monitor can be above 100ms, VR hardware makers figured out how to hit the 20ms mark with re-projections just before sending the image to headset. These and other factors, necessary for comfortable VR experience (from proper optics to tracking) have been largely solved on majority of the available hardware.

so why do people still get sick?

Of course, not all the hardware is good, you can still find headsets with bad optical calibration, low refresh rate or bad tracking. The tech coming from some unknown brands, is more likely to give you some sort of nausea simply because the headset is not calibrated or tracked properly. Similarly, bad VR content can cause sickness just as well. Recently i tried a VR demo at a big local retailer sponsored by Intel, where they were using Oculus Rift to show 24fps, 360° videos. Of course, people were getting sick.

And the other thing is: it can be psychological, so if you tell people VR will make them sick, it will act as negative placebo. Which means, they’re more likely to be sick from VR. So don’t do it.

Today VR systems address only visual and sound senses, however in our inner ear there is vestibular apparatus, which is basically a 5 Degree of Freedom tracker that detects linear acceleration and rotational movement. It’s critical for our balance and for keeping what we see sharp. By moving in VR and not moving in real-life, vestibular system detects we’re not moving and from the conflict our body, once again, assumes that we’ve been poisoned.

While this doesn’t affect experiences with no movement and teleportation, the freedom of movement is still very inviting and developers have come up with creative ways to work around this. Giving people a frame of reference, that they’re inside something, like a car or cockpit can help. Reducing field of view (Eagle Flight) or even replacing peripheral vision with static scene (Google Earth) can help as well, as movement is mostly visible on the periphery. Fast movement with no acceleration or deceleration (dash) is also a viable way to reduce this conflict.

Can VR be adapted to?

In short, most likely yes. A lot people have this experience, when they gotten very sick from a certain type of food, they usually start feeling sick even when they just see the certain type of food, even that they haven't tasted it yes and nothing is wrong with them. The body simply remembers the bad experience. So while something about sensory conflict is likely hardwired in our brain, there is psychological part of it too.

While there is (sadly) no hard data about people’s ability to adapt to motion sickness (as far as I know), most people from the industry whom I’ve talked to, about this issue, agree that we can observe people adapting, be it ourselves, our colleagues and friends or playtesters and others. The popularity of games like Onward, and the anger from the community when a good game releases without ‘full locomotion’ proves that there is a significant group of people, that can handle full locomotion in VR without experiencing any sickness at all.

But what about not finding a workaround, but solving this conflict by stimulating vestibular system. There are 2 ways of doing this, either using a motion simulator or a galvanic vestibular stimulation. 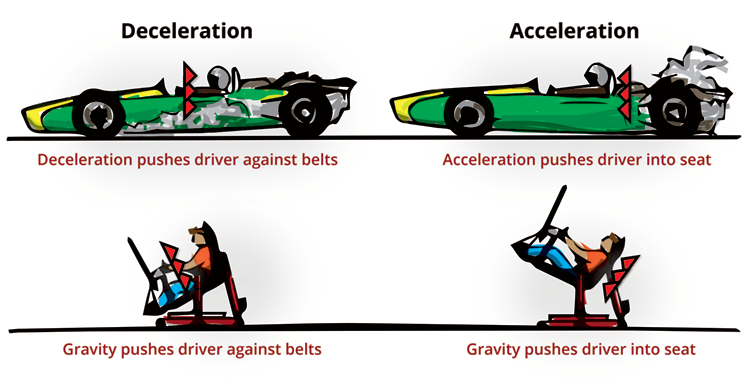 Motion simulators usually rotate your chair and use the gravity to trick you into thinking that what you feel is it’s linear acceleration. For this to work, the center of rotation should be as close to vestibular apparatus as possible, and this also why most motion sims don’t work and make you feel even more sick instead. But when done properly …

We’ve modded our roller-coaster collection Speed and Scream to work with Force Dynamics motion simulator. On various occasions, more than 400 people tried this and nobody got sick. For me personally it also felt very natural, and sense of presence was very intense. While proper motion simulators can be very expensive ($40K+), it’s definitively worth trying if you get the chance.

Other way of stimulating vestibular system is called Galvanic Vestibular Stimulation (GVS). Research proved to be capable of producing various sensations of movement and balance. At this point in time it is, however, still in research phase. But Samsung, for instance, unveiled a prototype Entrim 4D headphones capable of GVS last year, yet there was nothing new ever since. We however hope that we will see similar solution in not so distant future.

But even when the vestibular-ocular conflict is resolved, it doesn’t mean VR sickness will be solved, it’s just one part of the problem. 24fps, bad optical calibration or latency will still make people sick.
Back to Top
Close Zoom