About a month ago we released a tool to measure headset field of view that also submits the collected data to our database, creating the world's first crowdsourced database of VR headsets. To the time of writing this article, the database consists of 127 valid measurements of 24 different headsets. Let’s take a look at the data and what we can learn from them. But before we begin, I wanna shout out a huge Thank you to everyone who contributed to the database.

The result was filtered for most common headsets. For those interested in the complete result, check out the tool page or you can even get all measurements separately
* One outlier with VFOV of 80
** One outlier with VFOV of 67
*** Pimax headsets don't have correct optical calibration, so while the measured FOV is around the 160, the perceived by eye is around 20-30 smaller, as the sides of the headset are distorted
**** Several outliers with around 140, cause by 'normal' FOV settings instead of large.

As noted in 2014 talk by Michael Abrash field of view plays a critical role in presence. Michael stated that 80 degrees is needed to achieve a state of presence and that presence goes up with higher FOV, up to 110deg, which is the highest they tested in 2014. And we can confirm it goes up from there as well, up to 175, which is the maximum we tested. Aside presence, higher FOV can help with speed perception, because speeds get registered in the peripheral vision. 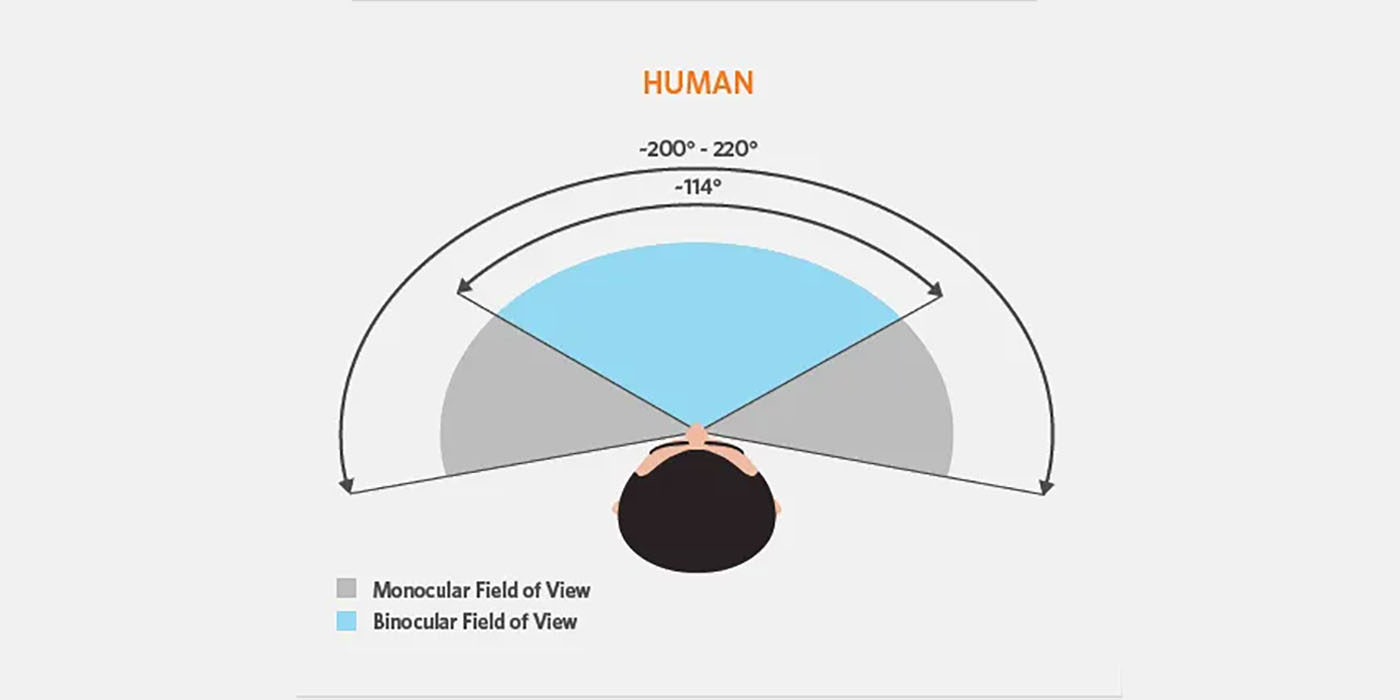 The limits of human vision are something like 210 deg horizontal, but that’s counting only when eyes are looking forward. As our eyes can move inside our head, we can perceive something like 240 degrees of what’s happening around us. Even headsets like StarVR One are still far from that goal, so there is plenty of room for improvement. It’s quite sad that pretty much all headsets are still in the original 80-110 range, especially when oculus had a varifocal prototype called Half Dome with 140 degrees back in 2017.

Back to data - FOV varies from person to person. There is a limit, based on what is rendered and optics. HMD geometry database provides a useful tool to check the theoretical maximum (even though their algorithm is a bit different and the values are smaller than our - more on that later). However reaching that maximum is another challenge that lies in face gasket design and headstrap. As for maximum FOV, the eyes need to be at an optimal distance from the lenses, which can be hard to achieve with many face shapes and head shapes. In certain headsets, we see consistent values that are close to theoretical maximums - for instance Oculus Rift CV1 or Valve Index are doing a great job in this area. On the other hand, for Oculus Quest, Rift S or Vive Cosmos the experience varies a lot. It seems that ‘halo’ headstraps are performing generally worse than the classic counterparts.

Maybe one last note that the FOV is measured inside virtual world, which may differ from the actual one. We simply assume that the optics are correctly calibrated and that objects in virtual worlds appear where they are supposed to. This is true for most headsets, however can get quite challenging when facing wider FOV. The easiest way to get check for it is to hold controller / other tracked object at certain location in VR and then take off the headset and if the object is still at the same position. For Pimax headset, the distortion is something between 10-15deg on each side. So even that the measured values are around 155, the actual perceived field of view can be quite lower. StarVR one passed the test. The last revision of XTAL we've tried failed horribly, with distortions close to 30degrees, but it's been quite a while.

As we’ve included the ability to flag headset as modded, we can see if different face gaskets or mounts can affect FOV, and there is some clear difference. Once again, if someone is already doing a great job with fitting, such as Valve Index and Rift CV1, there is not much room for improvement. But for instance for Oculus Quest the average person is something like 95deg, while the maximum is 105 and we can see people with mods getting closer to the maximum and improving the experience. Original Vive and Vive Pro are another good examples of this, as their maximum was almost identical to Index back then, however the average was quite similar with Rift CV1. We can see people using mods to get way closer to the maximum and significantly better experience.

We hope that this tool brings is a bit of clarity of what the actual field of view is, and I believe clarifying many myths there are in different communities as well as being spread by PR departments of various headset makers. I’m not going to be pointing fingers here, but here you can always check the claims against reality. And it’s actually something I’d like for journalist to start doing, as when someone claims their headset have a certain field of view and if the value is way above their theoretical maximum, it should be called out.

For the sake of completeness, at last I’d like to talk about the fact how we calculate FOV. Our approach is quite simple and since the tool is open source, anyone can check how it’s done. We attach the markers to camera in Unreal Engine, which means they’re headlocked. The camera position is between eyes and the marks are rendered at 2m distance. There is also an alternative approach that’s rendering / computing the marks from each eye separately - which is being used by the HMD Geometry Database. Now our approach gives slightly higher numbers, as the angle from the center of the head is higher than from each eye. The difference is based on the distance of markers and also the angle itself - the numbers will converge with higher distance, being identical in infinity and also being identical at 180degrees. For our approach, I believe that due to the fact our brain combines the image we see and we see it from ‘divine eye in between our physical eyes’ (As pointed out in this headless way experiment), so it makes more sense to measure from center. But I’m definitely not saying the other approach is wrong, it’s just to realize that there are 2 ways to measure it and they’re giving slightly different results.
Back to Top
Close Zoom