The first native 8K VR headset, for consumersPimax 8KX under the lenses

Hello again friends, as promised we’re back with a review of the Pimax 8KX headset, something we’ve waited 3 years to get our hands on and that day has finally come. Aside native 8K resolution, 8KX brings many new improvements. 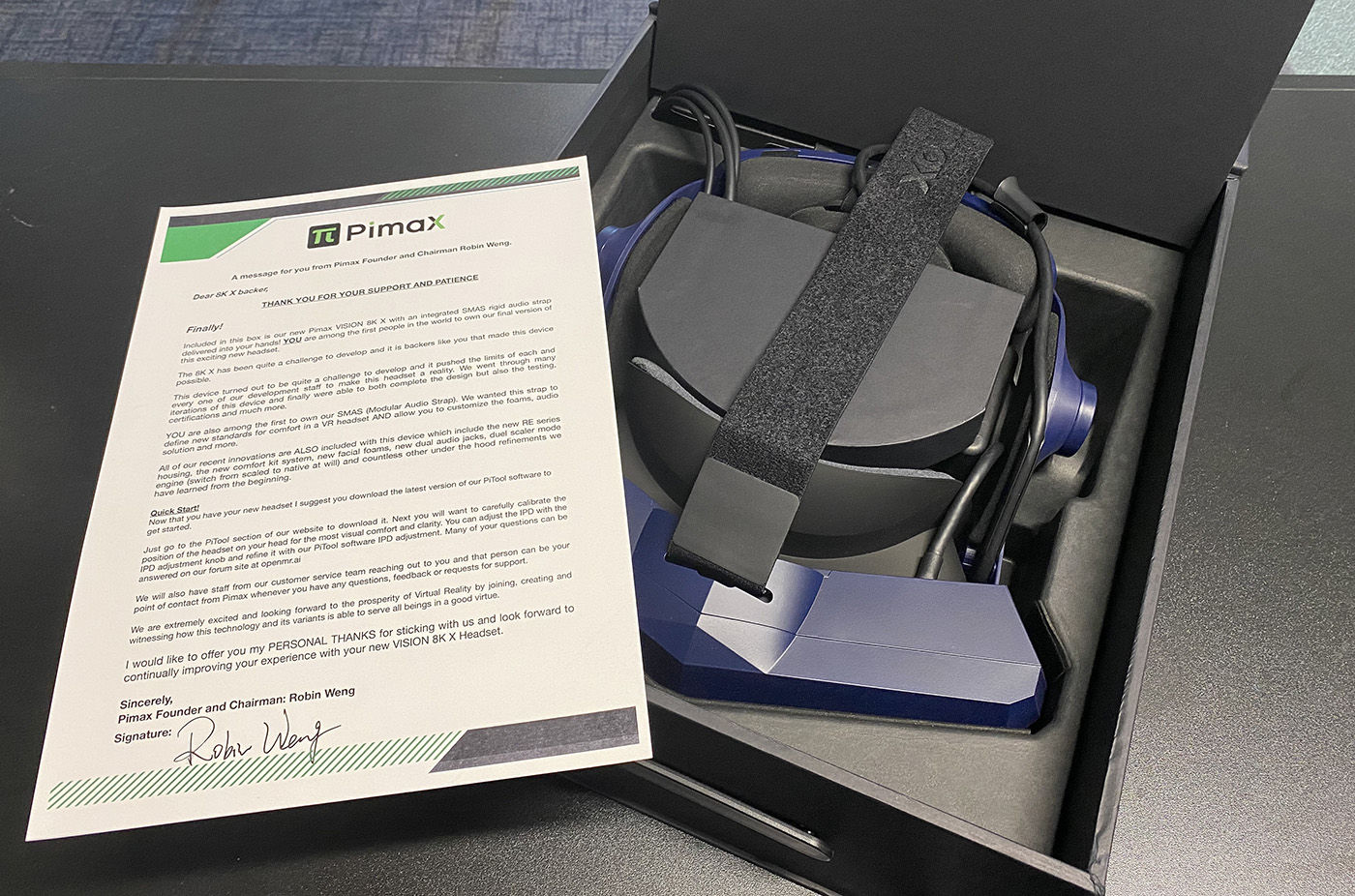 For those unaware, Pimax released their “8K series” in late 2018, there is some dispute over the 8K name, as the resolution of the panels is 3840x2160 per eye. More importantly, the 8K series consists of 2 headsets - 5K+ (2560x1440 per eye) and 8K (3840x2160 per eye), however both headsets render the 2560x1440 per eye resolution. The difference is that in the 8K headset the image is upscaled in the headset and displayed on a 4K panel, to reduce screen door effect. With the new 8KX, the image is rendered in the full resolution - 3840x2160 per eye and then sent to the headset, without any need of upscaling. It comes at a cost of reduced refresh rate to 75Hz.

When talking about the image, there are 2 factors at play - display and lenses, with the latter being more important and often underestimated. As stated above, Pimax has 2x 4K panels that are running natively and producing a very nice image - certainly more detailed than anything I’ve seen to date (haven’t had the chance with Reverb G2, yet). The lenses on the other hand are not that good - comparable to for instance Vive Pro lenses, which are outdated at this point - both by not being clear enough and producing some small aberrations. This creates a funny situation when you compare the image to Index, as the Index seems to have more clarity, while pimax has more details. I’ve added a visual acuity test to our testing tool and got to 20/50 on Index and to 20/30 on 8KX (lower is better). But honestly if I had to decide between Index picture quality and 8KX picture quality, Index would still be the winner. 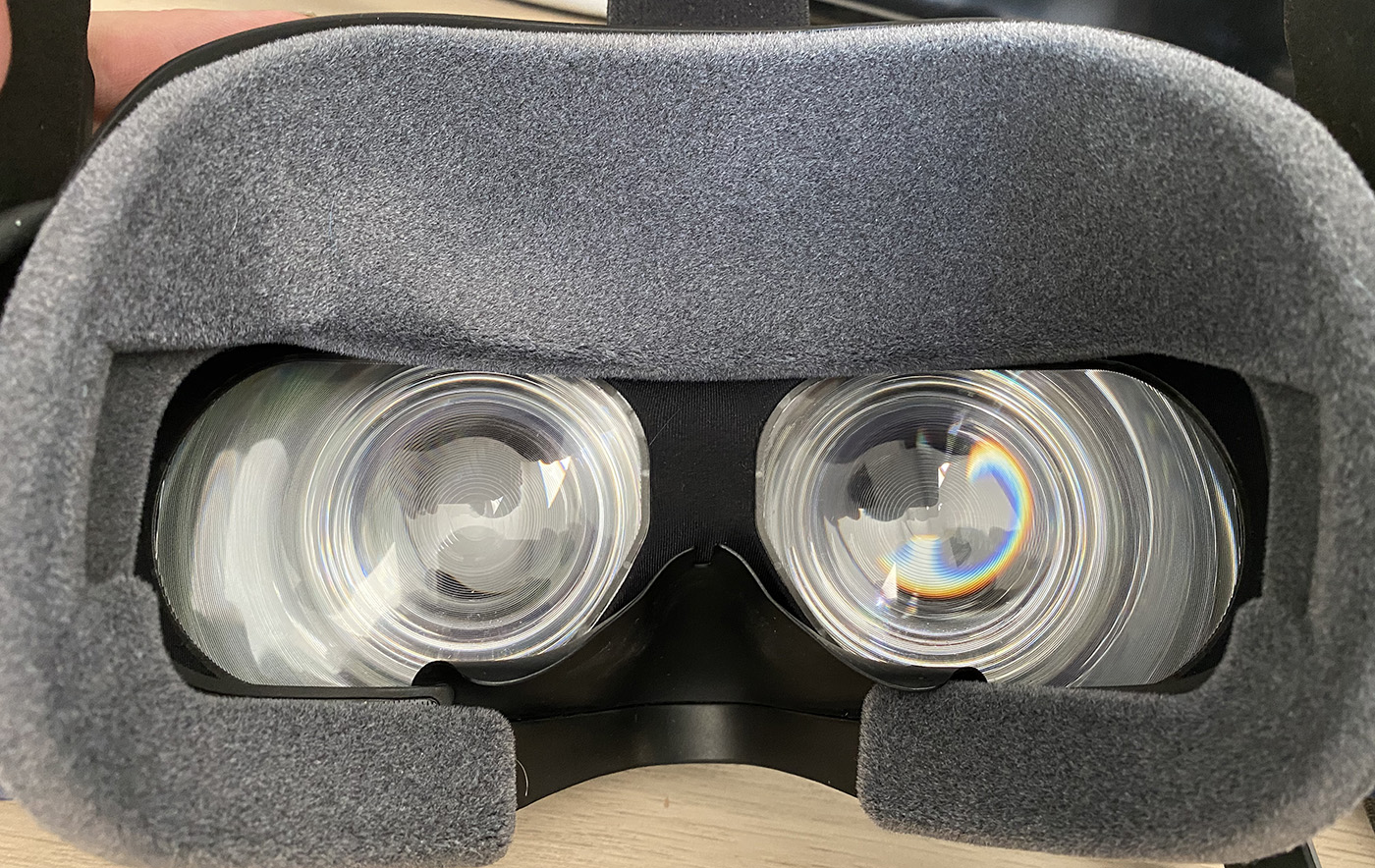 Pimax headsets are known for the wide field of view - 150 horizontal and 101 vertical when measured by our tool - this is an impressive achievement and is certainly the biggest FOV of consumer VR headsets. For reference, Index has about 100/100 and other headsets even lower. Only to be beaten by recently reviewed StarVR One. But, another thing Pimax headsets are known for is that their optics are not correctly calibrated and there are distortions on the side. This certainly got improved with 8KX, but not eliminated and the issue is still there. They’re harder to notice, but when you start testing them by for instance putting a controller towards the edge of the screen, look at it and then take the headset off, you can see the controller is not where it was in VR. At the edge of the screen the difference is about 10-15degress, which is a lot. I personally don’t mind them, some people do. You can always limit the FOV of the headset to resolve the issue, but also one of key 8KX advantages.

Some black magic at playPerformance 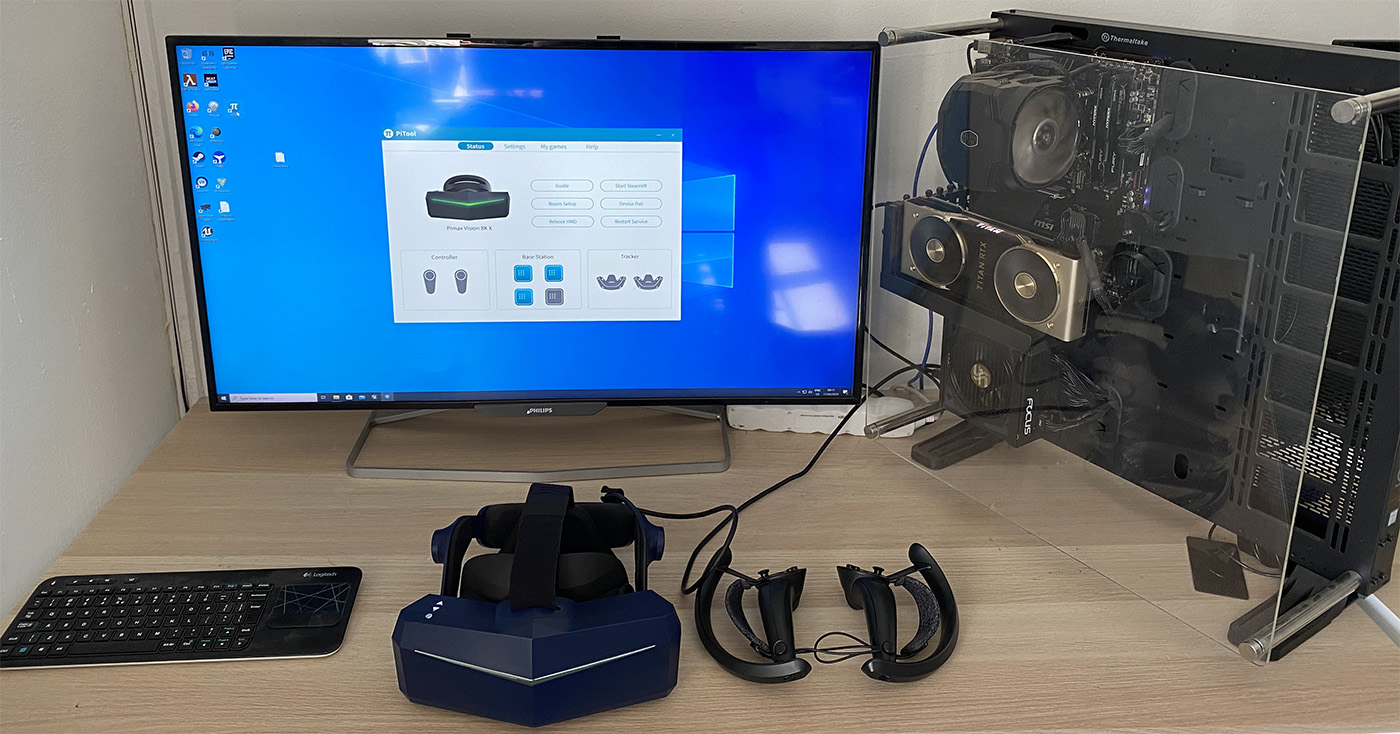 I remember when I first got my 5K+ almost 2 years ago and had some problems making things run even on my 2080Ti, so I was super curious on how 8KX would be doing and didn’t have much expectations. When I turned on the SteamVR performance graph, I was very surprised to learn how the headset is managing it’s and that it keeps the 75fps all the time, no dropped frames and a lot of power to spare. A technology called Fixed Foveated Rendering (FFR) is at play here, rendering sharply in the center vision and then lowering the resolution towards the edges, where you’re less likely to look. Our test PCs are equipped with RTX Titans to provide maximum performance (you can rent them for events btw ;) ), but from the look of it it seems even 2080 or maybe even 2070 could handle 8KX. And I was worried that I need to wait a few weeks until 3080 will be available. The 8KX also has upscaling mode, where pictures are rendered in 2560x1440 resolution, then upscaled in headset for the 3840x2160 and it’s running at 118Hz. Even there I haven’t had any problems keeping the 118fps smooth. But as the 120 or 144Hz mode felt more real on Index, the feeling didn't come on 8KX. My guess is that it's due to poorly calibrated lenses, but I can be wrong there. 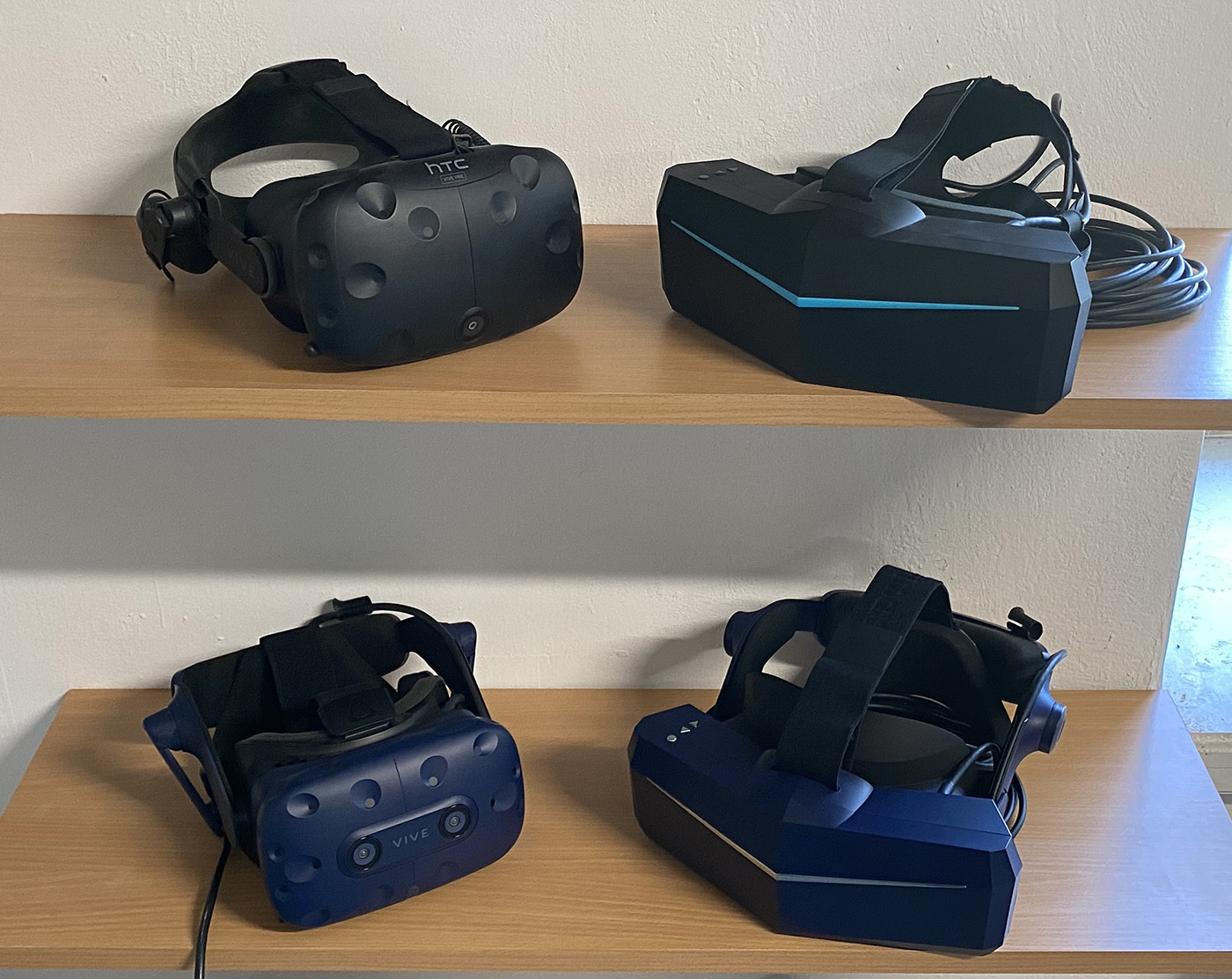 One thing that made me laugh that the new “Modular Audio Strap” (MAS) is a pretty nice copy of Vive Pro headstrap. I think Pimax got inspired by Vive even for their original cloth strap, which was a copy of Vive cloth strap. Now they copied the Vive Pro strap and even the Vive Pro color, which I found quite funny. Below is a set of photos that compare different features of Vive Pro and Pimax 8KX, notice even the cable path is identical.

But aside from that, how good is the copy? For my head, it’s not bad. It’s less comfortable than Vive Pro, but certainly going to do a good job, the headset is comfortable to wear even for longer period of time. The problem arises when you have a smaller head, as the pimax is quite big and the strap is attached to the sides of the headset. A colleague of mine with a smaller head had a problem that when rapidly moving his head, the headset is not firmly attached. Also he reported light leaking in from the sides.

The headset is also having an integrated audio that is integrated into the strap in the form of a speaker that’s above your ears, deviating from Vive Pro design of integrated headphones. While using off-ear speakers is becoming a new standard, the pimax solution isn’t a good one. It’s using a small speaker best compared to those of Oculus Quest - better when it comes to volume levels, worse when it comes to audio quality levels.

The main problem is that spatialization is broken. Our ear determines the direction from which a sound is coming from by the way sound is reflected around our ear - for instance, when a sound is coming from top, it reflects from our shoulder and certain frequencies bounce into our ear twice. The magic of spatial sound is then done by knowing the user head position, then sound position and then emulating all the bounces and sending the result into ear directly, creating an illusion of spatial sound. Easy to do with stereo headphones, but as Oculus proved working even for off ear speakers that are away from the ear in certain directions. But in Pimax it doesn’t work, and I’ve tested several experiences and in all of them, the sound is coming pretty exactly from where the speakers are, no spatial experience present. This is something that can be addressed in software, but we will see if it will be.

The MAS my 8KX is having is the Standard version (SMAS), Pimax is also working on Deluxe version (DMAS), which is mimicking Index design by having a speaker directly in front of an ear, which might not suffer from this issue.

Pimax is requiring it’s proprietary tool PiTool to be installed on the system, allowing to change different settings with the headset. PiTool then creates compatibility SteamVR and Oculus applications. There are several features that deserve attention, one of them is “Compatible with parallel projections” checkbox. If you remember my StarVR review, where I said that many apps have problems with canted display, this checkbox can fix it - at the cost of performance. You can disable SteamVR tracking and go to 3DOF using onboard IMUs. And if some game is hardcoded to launch only using Vive, there is a checkbox that fix that too. Of course you can switch resolution, play with some performance sliders, pair controllers, adjust colors, basically it does everything it needs to do and some more.

In the end?Quite good, for a copycat

Pimax is quite an unique company in a way that it shows they don’t have strong R&D. I laughed quite hard at how they copied the audio strap from the Vive Pro. But they manage to deliver a solid product. The FOV is huge, the picture is nice and the software magic causes it’s quite enjoyable. Index is still remaining my daily driver, even though I can feel the downgrade in FOV quite hard. In our XR Lab when we give people a choice between 8KX and StarVR, 8KX won in almost all cases. Pimax would be a good choice for all simulator fans - driving and flying alike, as The resolution causes that instrument panels can be read and the FOV gives situation awareness. Location based entertainment centers would also be good fit. Also for relaxation purposes in VR, the FOV plays a big role. For most other uses, they're designed for narrow FOV headsets, so it doesn't give you much of an additional enjoyment. Unless you care about FOV, that's it. The only real issue is the audio, which will hopefully be addressed by the DMAS version of strap or via software update. Pimax keeps updating their products, like when Valve debuted 144Hz mode on Index, the 5K+ quickly got a firmware update that allowed it as well, so there is hope for that.

One thing where Pimax is shooting itself in the leg is their customer support, where Chinese agents with poor English that often cannot understand what you’re saying are causing a lot of problems and complaints - which are all over the net. Also as Pimax cannot estimate their manufacturing and shipping capacity, leading to endless delays, which undermines their credibility. And for these reasons, I can’t imagine enterprise providers wanting to work with Pimax as well, despite they’re providing very competitive product against the two main competitors, which are StarVR and VRgineers.

As always, if you found this piece insightful, be sure to like iNFINITE Production on Facebook and follow me on Twitter, so you won't miss any more updates from us in the future. Pimax 8KX is available for rent from us and, for our clients, it's available to try in our lab. So if you're one of them be sure to drop by to give it a try while it's hot.

Black box, embossed logo on top, handle in the front, magnetic locking mechanism ... wondering whenever you've seen this before?

Back to Top
Close Zoom